Every year, Terra Madre Day can be celebrated in an endless number of ways, from small gatherings to large events: a celebratory picnic or dinner, a film screening or concert to raise the profile of good, clean and fair food, an excursion to visit Terra Madre producers, food or taste education activities, a local gathering of producers, chefs, youth and others… or a combination of the above. Be creative!

This year’s theme is “Regeneraction”.

After a difficult last couple of years, Terra Madre Day offers the occasion to come back (where possible and adhering to local safety measures) out of isolation and back into sharing and conviviality. And what better way to do that than coming together and sharing a good meal with our communities!

That’s why we are calling on all our convivia and communities around the world to step up and, in whatever way possible, bring people together around the table again!

To spread the word about the campaign, download the kit, spread the word and use the hashtags #TerraMadreDay and #SlowFood so we can share all Terra Madre day worldwide updates on our channels!

In need of more inspiration? Check out our Terra Madre day event ideas below!

''I lived in Donetsk until 2014, shortly before the so-called status referendums were held in May. I was running a small business at the same, and had several goats of my own. But the tensions in the Donbas region following the Maidan Revolution forced me out of my home; I no longer felt safe, having a pro-Ukrainian position. My business was lost. 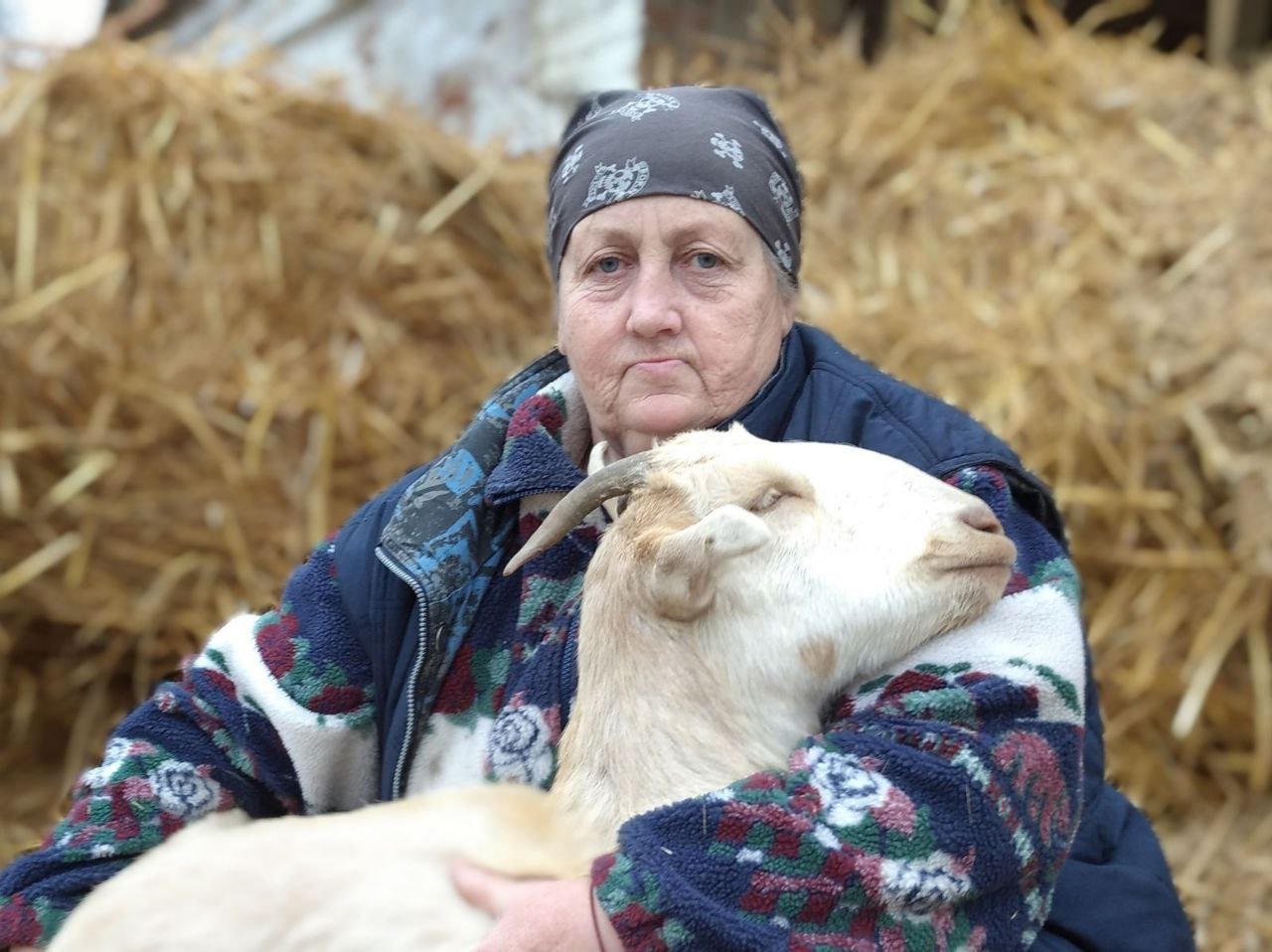 With the loss of my business, we had to look for new sources of income; with my family we decided that the we would focus on breeding goats. We’d given a lot of thought to the idea of creating a Ukrainian goat breed, and now was the time to take it more seriously. So over the coming years we increased our number of animals and began to make cheese to sell, using the revenue to build a cellar to age the cheeses and increase our offering.

Our cheeses, I’d like to underline, are made with the unpasteurized, raw milk of animals raised on a natural diet—at least, they were until the war. At first I was working alone, but as time went on my son joined the business, and eventually had to hire more workers too. When the Russian invasion of Ukraine began, we had four full-time employees and two other seasonal workers. Our main source of income was the sale of our cheese and male goat kids.

Interest in the Ukrainian short-eared goat breed that we were raising gradually grew over this time period, especially after we cross-bred them with American LaMancha goats. Our short-eared landrace goats were in good health, producing high-quality milk, but the animals weren’t uniform enough to be considered a single, certifiable breed. We collected as many local examples of the short-eared goats as we could, and conducted a targeted, selected breeding program in order to distinguish the breed. Our hard work paid off, as the Ukrainian short-eared goat was officially added to the national list of breeds in 2017, on the basis of ten goats from our farm.

At the time of writing, especially given the war, it is impossible for us to say exactly how much Ukrainian short-eared goats there are in existence, but it may be as many as several hundred. Of the 100 officially identified and registered animals, 75 are on our farm, making us the largest Ukrainian shor.

Although a little more than 100 heads have been officially identified and registered, 75 of them are on our farm. We are, therefore, the largest source of Ukrainian short-eared goats, and the only farm which breeds them exclusively, having no other animals.

After the start of the invasion, we initially planned to evacuate, as we are in a contested area of active hostilities in the east of the country, but after assessing all the pros and cons our options, we decided we had to remain. It was more important for us to preserve our unique animals, our unique products, and despite the war we are located in an ecologically clean corner of the largely-industrial Donbas region. Our pastures have a unique composition of meadow herbs, which is what gives our cheeses their quality. All this was too much for us throw away, so we remain, and go on with our lives, go on with our work to save these animals. Our other employees have all left, but me and my son have stayed.

Our animals, however, face other threats: because of the war we have significant problems getting hold of supplies like fodder. Active hostilities—and the barrage of artillery, most of all—have left a deep imprint on the animals, and in the spring there were premature births and a higher-than-normal mortality rate among the young animals; they wear the stress of war the same as we do.

The animals have grown somewhat accustomed to the situation, but they still react in panic when aircraft and missiles fly overhead. Luckily we have a generator on the farm, so the constant blackouts affecting many other parts of the country are not a critical factor for us. We can get water from a private well, but access depends only on the availability of electricity.

A farmer friend invited me to be part of Slow Food, and we immediately received some financial assistance for fodder. The biggest problem for us today is the purchase of hay, as the harvest has been so badly affected and we risk of losing livestock if we cannot ensure our supply. We are trying to raise funds to buy a large enough batch of hay to get us through the winter, when the animals won’t be able to feed on pasture. Nonetheless, we plan to preserve and increase our number of livestock, and to continue making cheese according to our traditional recipes.

Our traditional dairy products include a special sour cream called zbyranka and a sour-milk soft cheese which is heated in the oven while fresh. Unfortunately, we are not able to cook this product at the moment because our oven is broken and we do not have the money to repair it.

Despite the difficulties we are facing, we haven’t lost hope. We push forward as best we can, motivated by our animals and the people who rely on us for food. We hope to be able to achieve even more, and together with other farmers to preserve as many local breeds and plant varieties as possible; this our agricultural heritage, and it’s an integral part of our unique culture. People all across Ukraine are defending their homes, their lives, their identities, in an ongoing struggle against the invaders, and the thought that we are not alone gives us the strength to carry on”.

Being part of the great Slow Food network means not feeling alone, wherever you are

Continue to support Slow Food in 2023

Despite the unbelievable horror of the situation on the ground in Ukraine, many of our Slow Food leaders and activists have decided to stay behind to protect, feed and restore their communities. They are calling on us—the global Slow Food family—to support them; both those who have had to leave their homes, and those who have stayed behind.

1) Saving Ukrainian biodiversity. To support those farmers who, even in wartime, have not left their farms and continue to work under the most difficult conditions, risking their lives to preserve the animal breeds and plant varieties they grow in order to nourish their local community and feed the future. We are making a plea to the global Slow Food community to support them financially with a donation.

2) Keeping knowledge alive. To create matching opportunities between Ukrainian Slow Food Community members and their counterparts throughout Europe, thus allowing for refugee farmers and food producers to be hosted by fellow producers to facilitate a meaningful opportunity for learning and exchange. Beekeepers to be matched with beekeepers, cheesemakers with cheesemakers, and so on. We believe this exchange will not only allow for Ukrainian food producers to keep practicing their trades in exile but will be a fruitful exchange of skills: skills which will be vital for the post-war reconstruction of the country.

As we develop these two projects, we will provide constant updates on this page and on all Slow Food communication channels: the list of Slow Food Communities to be supported, how the resources will be distributed, and the matches that we will create.

We ask you for your support: any amount you can give helps. DONATE NOW and share the message with your friends and contacts, so we can all ensure that urgent support is given where it is needed to most.

The funds raised will be entirely allocated to the Slow Food Communities in Ukraine, according to the indications provided to us by the coordinators of the network.